I will be writing periodically in my own voice about issues that I’m passionate about: the women’s movement, the environment, and LGBTQ rights.

I wake up every day wondering how I can feel empowered. How do I stay sane at this current political moment? What can I hold onto that gives me hope? Right now the #MeToo movement has been helping balance me as I witness the worst political time I can remember. Time Magazine gave the remarkable #MeToo movement even more legitimacy when it named as Person of the Year “The Silence Breakers, the Voices that Launched a Movement.”

I read with wonder the revelations of women who finally broke the code of silence around Harvey Weinstein’s predatory behavior. I watched the floodgates open as women everywhere, from entertainment and businesses, to statehouses and factories began to speak out about the sexual harassment and assault they experienced. Salma Hayek’s account of her experiences at Weinstein’s hands moved me greatly, as did the faces and words of the women working at the Ford assembly plant in Chicago and Lily Maase’s account of trying to make it as a guitarist in New York. I was appalled by revelations about Dustin Hoffman and Keven Spacey, who I’ve always admired as actors. I was interested also, to read how difficult it is to get some of this information printed.

I was revolted, but not surprised by revelations about Woody Allen, whose pedophilic tastes are in his films for all to see. I was saddened that the same abusive culture also rules in the restaurant business.

All these women, from the famous to the ordinary, have been speaking out and being heard. It’s always been hard to make a living, but having to put up with predatory behavior from men in the workplace seems like an almost universal reality for women. When I left graduate school in art history to be an artist, I did temporary work in offices so I could take time between stints to paint. I was exposed to a lot of workplaces at the low end of the spectrum. At one job I remember being cornered in the coffee room repeatedly by a man who worked there. (It was one of my jobs to make the coffee). I just kept dodging him for a while, but soon it was clear he wasn’t going to stop and it was time for me to move on. I was glad I had that option, though. I can’t imagine what it would be like to have to fend off unwanted attentions daily in order to keep a job. That appears to be the experience of a many of women working in this country. I’m so glad that so many women right now are finding their voices and speaking out about this abuse.

Like many women of the baby-boomer generation I was socialized to be polite. I didn’t call men out on their behavior or report it to anyone in authority. When the owner of a small hotel in Italy attempted to rape me I just made sure I avoided him carefully in the future. When I was grabbed from behind on my way to the subway, I just kept on going on my way to classes. I threw out the jacket I’d been wearing, though. I never wanted to see it again because it reminded me of that terrifying moment. But I never spoke of that incident to anyone until thirty years later.

I lived in fear of the men on the subway who exposed themselves and masturbated in front of me almost daily as I commuted to junior high and high school from Manhattan to the Bronx. My subway buddy, Kathy and I would just look at each other when one of them started up and move to different seats or another subway car. It was just part of the daily routine of being “hassled” as my family referred to it. It wasn’t okay to complain about it too much. I got the clear message that nobody wanted to know too much, or to do anything to make my trip to school less disgusting. There’s a good opinion piece by Jennifer Weiner about the basement where women have kept all this stuff.

When men behaved badly, my social training taught me to be quiet, be polite, brush it off, and not make a scene. Even when I was paying for a cab ride and the cab driver was make lewd comments. Even when I was in a movie theater and I had paid to sit and watch the film, not to be groped by a stranger.  Especially in social situations when men who had too much to drink felt they could invade my space. Once in the subway when a man grabbed me in a crowded tunnel, I just couldn’t be quiet any more. Reflexively, I screamed at him with all the anger of accumulated experiences to “get away and leave me alone.” It worked and he bolted. The power of my rage surprised me. And I’ll never forget the shocked expressions of all the people who turned to look at me; I was the one who had done something wrong and upset the social order.

In 1991 as I watched Anita Hill describe the graphic and unpleasant details of Clarence Thomas’s workplace harassment, I couldn’t look away from the TV screen.  I was galvanized by her testimony at the hearings for Thomas’s Supreme Court Nomination. I was sure that her words would change everything. But instead, I watched in horror as she was belittled and humiliated. Thomas went on to be confirmed. Anita Hill’s career and her good name suffered as she was made into a public joke. That was a moment I thought would change everything. And nothing changed.

A Hope for Real Change

I’m hoping that things will be different this time around. In the two weeks since I first wrote a draft of this post, I have noticed several major stories breaking daily with harrowing first person accounts. I can’t begin to link to all of them here, but anyone plugged into the news will have seen many of them. They are impossible to ignore, and that is part of their power. I have participated in the catharsis of #MeToo truth telling myself on Facebook, and supported friends doing the same. I’ve asked other women how they feel about #MeToo and why they think it started. Invariably, Trump’s character and a reaction to it are the main causes. I can only hope that this remarkable movement will lead to real change.

At the beginning of 2018 a group of powerful and diverse women in Hollywood unveiled an Anti-Harassment action plan called Time’s Up. It includes a legal defense fund to help less privileged women, legislation plans, gender parity at studios, and raising public awareness. I’m very encouraged to see such a coordinated response to continuing harassment revelations.

Following the retirement of an appeals court judge in the shadow of sexual misconduct charges, Chief Justice Roberts also announced a task force to examine the procedures surrounding sexual harassment of law clerks and other employees. He stated the federal court must do more to protect employees from abusive conduct. Hopefully these developments are the beginning of a broader movement that will keep the momentum of changing attitudes rolling. Perhaps this is the year that ushers out the old culture of harassment and brings a new era of gender equality. 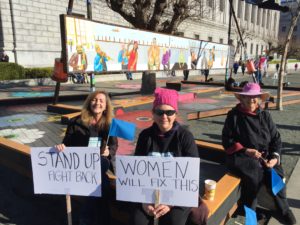 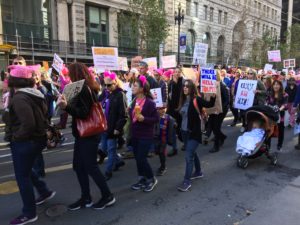 Susan Sternau is a landscape painter living and working in Sausalito, California.  She is the author of four popular books on art and architecture: Art Nouveau: Spirit of the Belle Epoque, Art Deco: Flights of Artistic Fancy, Henri Matisse, and Museums: Masterpieces of Architecture. Her most recent book is Easter Island Sketchbook: An Artist’s Journey to the Mysterious Land of Giant Stone Statues illustrated with over 65 of her watercolor and ink paintings. Susan has also been writing a blog about art: Art Thoughts http://susansternau.com/art-thoughts/ since 2009. Learn more at Susan Sternau Studios.

Join us for our Inaugural 2019 Meeting!